MAY MY BLESSING BE IN EACH ONE OF YOU A REASON FOR CONVERSION IN THIS COMMEMORATION OF MY RESURRECTION.
I invite you to spread My Call so that your brothers and sisters would not continue in the spiritual blindness that plunges them into the abyss of denial, of foolishness and of continuing to ignore My Calls due to human selfishness.

MAY MY BLESSING BE IN EACH ONE OF YOU A REASON FOR CONVERSION IN THIS COMMEMORATION OF MY RESURRECTION.

I invite you to spread My Call so that your brothers and sisters would not continue in the spiritual blindness that plunges them into the abyss of denial, of foolishness and of continuing to ignore My Calls due to human selfishness.

The human creature finds himself in urgent need of spiritual eyesalve (Rev. 3,18) to remove everything that stops him and leads him to continue denying the Calls from My House.

HOW MUCH WILL THEY GRIEVE FOR NOT HAVING BELIEVED!

Children, the advance of what is to come for humanity is not long in coming. That is why I have warned you so many years ago and that is why My Most Holy Mother and Saint Michael the Archangel HAVE SENT YOU THEIR WORD OF LOVING ANNOUNCEMENT ABOUT WHAT IS FOUND UPON HUMANITY AND IT IS, ALREADY!

My People, this generation ignores what is happening and science has hidden it for decades so as not to alarm. There is no longer any reason to wait, I have not been obeyed and you will be alarmed by the announcements of science.

MY CHILDREN, ONLY WITH CONVERSION WILL YOU BE ABLE TO MITIGATE THE SUFFERING YOU ARE FACING.

You have forgotten My Calls before the solar explosions towards the Earth. Fires and diseases increase in human creatures that alter their organism. Man is not prepared to receive these amounts of solar radiation, which will cause the human creature to suffer alterations in its organism. This increase in heat causes the scarcity of water necessary for them to survive. I announced the melting of the polar ice and with it the rise of the oceans and the danger to the coastal areas.

You have forgotten that years ago I warned you of the great famine on Earth, famine and pestilence in all countries.

The earth shakes strongly and the expected great earthquakes arrive and transform the Earth.

You have forgotten the serious threat that is approaching from Space and will graze the Earth causing extremely serious havoc.

You have forgotten that I announced that you were at war, in escalation of war. Some and other countries will enter this scenario and from one moment to the next the war will make the Earth something unknown.

BEFORE MAN DESTROYS MY CREATION, MAN WILL DESTROY HIMSELF AND I WILL HAVE RESCUED MY PEOPLE.

You have forgotten that I warned you that Europe will suffer. The war advances destroying countries to reach Italy and seize Rome.

MY BELOVED PEOPLE, LOOK WITH SPIRITUAL EYESALVE. The war carries in its entrails the spiritual struggle to reach Rome, which is a great objective.

Fear not. You must remember what I have already revealed to you before and you have forgotten.

I will not allow them to destroy the Earth. My People, do not fear.

I, THE OWNER OF ALL THAT EXISTS, PROTECT YOU.

Continue firm in the Faith being My People and receiving Me in the Holy Eucharist, praying, not reciting, praying with your heart for all humanity.

MAY NO ONE BELIEVE HIMSELF TO BE JUST…

THE JUST OF THE JUST IS THE ONE WHO LOVES YOU, YOUR LORD AND GOD.

My special Blessing on My children on this day.

Brothers and sisters in the Faith:

BLESSED VIRGIN MARY
Nov. 28, 2009
Little children, the error of Communism spreads throughout the earth like air and the signs occur day to day without the majority taking notice of them, like it is happening at this moment. Extreme hunger will be greater every day, natural disasters will increase, the desire for power of the great nations will end in great calamities for all of humanity.

BLESSED VIRGIN MARY
Apr. 10, 2010
Little children: the lack of correspondence towards all that God the Father has given man will bring more destruction. The sun star will cease to be so supportive of man, its vibration will be a manifestation that will harm humanity. Natural catastrophes will flood the earth, which will continue to tremble continually.

BLESSED VIRGIN MARY
Apr. 09, 2016
Children, the human organism will be altered by the great emanations coming from the sun. These will cause alterations in man’s psyche, in his nervous system, increasing the stress in which humanity lives, and altering at the same time the behavior of Nature.

OUR LORD JESUS CHRIST
Aug. 17, 2018
Nature is increasingly severe towards man, until the Earth’s climate will change in its entirety and My children will begin to suffer on a cold, sunless Earth. Children, the temperatures on earth drop and you will live with the extreme cold.

SAINT MICHAEL THE ARCHANGEL
Mar. 04, 2021
Humanity finds itself on the brink of chaos, with the Earth being threatened by various bodies coming from Space and which have an influence on the climate, on volcanoes, on the earth’s tectonic faults, on the human body and on animals.

SAINT MICHAEL THE ARCHANGEL
Apr. 03, 2020
People of God, you will see with your own eyes the beginning of the WAR OF ARMAMENTS, not only the BACTERIOLOGICAL WAR in which you are living. Ah … how Divine Wrath will fall upon those who have brought the pain of disease upon the human beings!

Luz de Maria Shared her Vision of a Tsunami

“The survival of the fittest“: this is how Luz de Maria describes what she saw through the world in the midst of the tribulations. The vision appears to allude to two distinct tsunamis, one product of an earthquake and the other of a volcano emerging from the depths of the sea.

It is expected that this monday’s afternoon/night and tomorrow, the Category 5 Hurricane dubbed “Dorian” will touch U.S. east coast at the state of Florida. Authorities warn it may cause serious damages and remain active as it travels the east coast towards the north.

Satellite imagery of the raging fires on the Amazon rainforest spark global outcry as suspected environment damaging politics try to open more land to agriculture. The Amazon rainforest, which provides a high amount of the world’s oxygen, has been ablaze for weeks now. 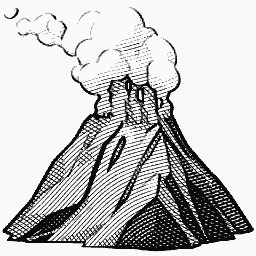 I have called each of you by name, I have called you to stay in the path to conversion and that every step you make is directed towards Me, however difficult the circumstances may be, you know My Ways very well. If you find no difficulties, ask yourselves which way are you travelling.

The dense darkness is descending over the Earth, the darkness that will advance having its cause in the gases of great volcanoes that will enter into action, the temperature of the Earth will decrease, as it has done before, only that this time the instant will be prolonged more.

MY PEOPLE, DO NOT REMAIN BUSY WITH THE AFFAIRS OF THE MOMENT, EVERYTHING IS TRANSIENT, WHAT YOU MUST ENRICH IS THE SOUL. PREPARE YOURSELVES FOR THE GREAT CHANGES THAT HUMANITY WILL FACE IN EVERY ASPECT.

YOU ARE STALKED BY EVIL, THE GREATEST DEFENSE IS THE PERMANENCE IN FAITH AND STATE OF GRACE. WHEN EVIL STALKS YOU, PRAY THE CREED WITH A CRUCIFIX IN YOUR HAND AND ALOFT, BUT MAN MUST BE IN STATE OF GRACE.

MY PEOPLE, CONSECRATE YOURSELVES TO MY MOTHER, SHE, THE WOMAN DRESSED IN THE SUN, (Rev. 12.1), IS THE ONE WHO ECLIPSES THE DEVIL WITH HER PURITY AND MAKES HIM TURN BACK WHEN IT SEEMS TO HAVE ALREADY DEFEATED MAN.

Love My Mother, whom I have given My Children to lead them to Our Holy Trinity. Love Her and be true Children of My Most Holy Mother.