Meditation from a brief parable from Mt. 13:52. The Old Testament provides the foundation for the Good News. There is no valid catechesis without reaffirming and giving its fair value to the O.T.

“Do you understand all these things?” They answered, “Yes.”
And he replied, “Then every scribe who has been instructed in the kingdom of heaven is like the head of a household who brings from his storeroom both the new and the old.”Mt 13:51-52

“The Gospel as revealed to me” (Valtorta) has this words:

(…)
« Have you understood? Do you understand what I say by means of comparisons taken from every day life, but enlightened by a supernatural light that explains their eternal meaning? »
« Yes, Master, we do. »
« Remember then the method to teach crowds. Because that is one of the secrets of scribes and rabbis: to remember. I solemnly tell you that each of you, imbued with the wisdom that ensures the possession of the Kingdom of Heaven, is like the father of a family who takes from his treasury what is necessary for his family, making use of old and new things, for one only purpose, which is the welfare of his children.
Ch. ~238

The term “treasure” (βησαυρός) used, refers to a chest where valuable, inherited or necessary things to the home were kept. Here we talk about a good “father of a family” that for the better of his family relies not only on new things, that could be considered better for being modern, but also on those old things that in spite of their antiquity remain useful and valid, as foundations on which new things develop.

It is the balance of who, in the repertoire of wisdom acquired during the course of his life (which resembles a doctrinal treasure from which memory can extract what is necessary for the occasion), knows how to take advantage of everything, without disregarding ancient traditions nor rejecting the later teachings of Jesus Christ.

This parable invites us to see that the Good News has not made the Jewish culture and religious tradition obsolete, but on the contrary, to instill in them a new and unexpected vigor. Something similar to the child that as he grows and matures, becomes apt to receive and understand more sophisticated teachings, without this meaning that the previous teachings were incorrect, but rather, that they were appropriate for the state of maturity in which he was. Thus the People of God grew up in its different historical stages.

Therefore, the Jewish doctor that became a disciple of Christ, possesses and manages all the richness of the Old Covenant, augmented by the refinement of the new one, being abrogated only those parts that oppose the Great Commandment of love taught by Jesus, and that, although they could have been convenient when man was organized in precarious societies in which he was little more than an animal (Talion law), they are no longer legitimate after the incarnate coming of Jesus Christ.

It is interesting to meditate on this parable in the context of a modernism that puts in doubt ancient truths, despite the numerous archaeological findings that verify the historical truth contained in the Bible, going back even to the time of the Patriarchs from the Genesis.

“Do not think that I have come to abolish the law or the prophets. I have come not to abolish but to fulfill.
Amen, I say to you, until heaven and earth pass away, not the smallest letter or the smallest part of a letter will pass from the law, until all things have taken place.
Therefore, whoever breaks one of the least of these commandments and teaches others to do so will be called least in the kingdom of heaven. But whoever obeys and teaches these commandments will be called greatest in the kingdom of heaven.Mt 5:17-19
It is easier for heaven and earth to pass away than for the smallest part of a letter of the law to become invalid.Lk. 16:17
Are we then annulling the law by this faith? Of course not! On the contrary, we are supporting the law.Rom 3:31

Jesus does not come to destroy the law nor to consecrate it as intangible, but to give with his teaching and his way of acting a new and definitive form to the Law, in which finally it is realized in fullness following the path the Law led. This is particularly true on the perfection of ‘justice’. 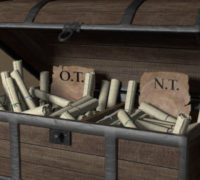 To the extent possible under law, DEUNANUBE.COM has waived all copyright and related or neighboring rights to ‘New Things Old Things’.

You are free to use, modify, adapt and publish with or without commercial purpose the following images without requiring author’s permission.